What it means for investment markets

The long-awaited UK referendum took place last week on Thursday 23 June with the result known by Friday. In what was a fairly close call the UK has decided to leave the European Union (EU) with the votes coming in at 52% to 'leave' and 48% to 'remain'. Interestingly, there was some diversity across the regions of the UK with Scotland and Northern Ireland voting to 'remain' (62% and 56% respectively), but the rest of the UK outweighing them to sway the vote towards leave.

This result was contrary to the pre-vote bookmaker odds which favoured a 'remain' vote to win by a small margin. The pre-vote polls were somewhat mixed and were difficult to read with the results varying from day-to-day prior to Thursday.

It is important to note that the process of the UK leaving the EU will take around two years and a considerable amount of negotiations around trade and immigration will need to be bedded down by the government. UK Prime Minister, David Cameron has resigned and it is expected that there will be further political changes over the coming weeks as those that had been supporting the 'remain' vote decide on their futures. Interestingly, Scotland is reconsidering another

independence referendum given their strong vote to remain as part of the EU.

Once the dust has settled on the immediate reaction to the Brexit vote, there are some concerns on what it means for the rest of Europe and other countries potentially exiting from the Eurozone. Initial thoughts are that the Eurozone will continue to stay together, but the rise of populist parties have cast some doubts, with Italy looking the most vulnerable today.

Markets were volatile in the weeks leading up to the referendum with polls swaying between ‘remain’ and ‘leave’. Early June polling suggested a win for ‘leave’ but the week prior to the vote was leaning towards a ‘remain’ win. However, it was clear that going into the vote a ‘leave’ win would result in a negative impact for investment markets, particularly UK equities and the British Pound (GBP). Sure enough, the actual result to leave the EU has resulted in an immediate negative sentiment in equity markets and weakness in the GBP and Australian Dollar (AUD).

The impact on investment assets is summarised below. 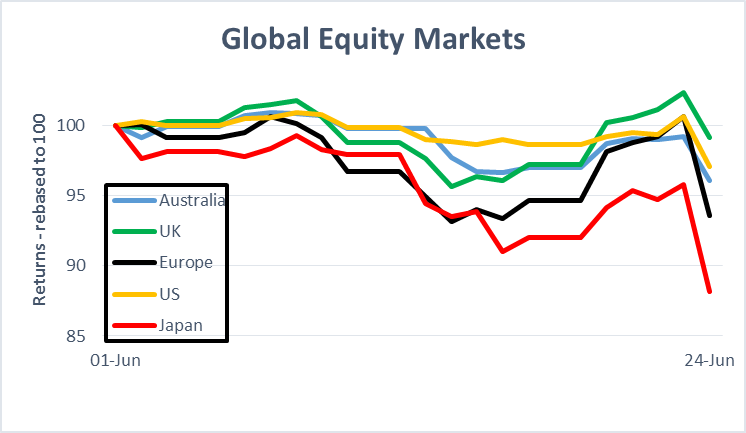 It will take some time for the market to fully understand what the result of the referendum means for equity markets, but expectations are that this fall in markets will be temporary and in fact it may provide an opportunity in the longer term as the market settles down.

Currency markets
Sentiment in the week prior to the referendum was positive which pushed the value of the GBP up by around 8% in a two week period. However, as expected a win for the ‘leave’ voters has resulted in a reversal of this trend with the GBP in particular down sharply. Key market currency rates are shown in the following charts: 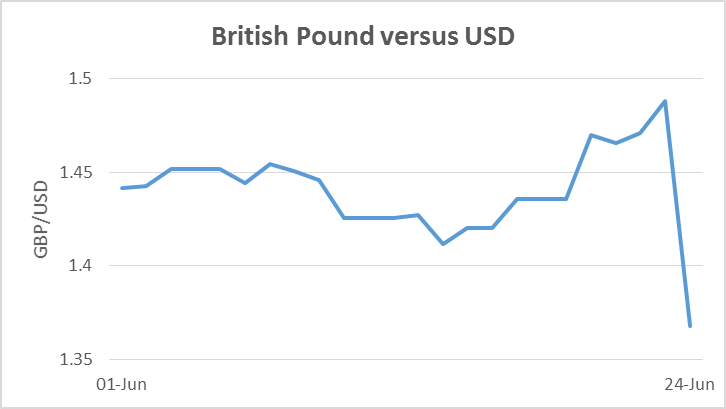 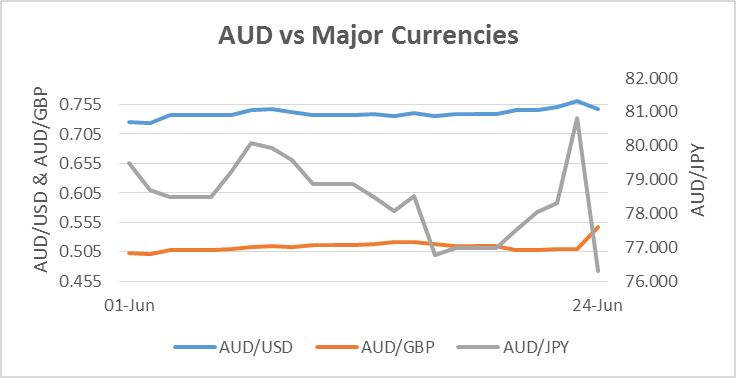 Friday’s movements in currency markets were:

These currency movements were not surprising following a ‘leave’ win. Again, it is expected that this is mostly a short term phenomenon and markets will settle down over the coming month, particularly the GBP which is back down at levels not seen since the mid 1980’s.The USD and Japanese Yen are seen as safe haven currencies and generally appreciate when risk and uncertainty increases. Conversely, the AUD generally depreciates when risk increases, thus the AUD has fallen against the USD and Japanese Yen.

Commodity markets
Commodity markets have also been very volatile over recent weeks leading up to the referendum. The chart below shows the recent movements in these two (2) key commodities with the oil price falling on Friday whilst iron ore has been more steady. The iron ore price is particularly important for Australia given it is one of our key exports and can materially impact on the Australian economy and company profits. 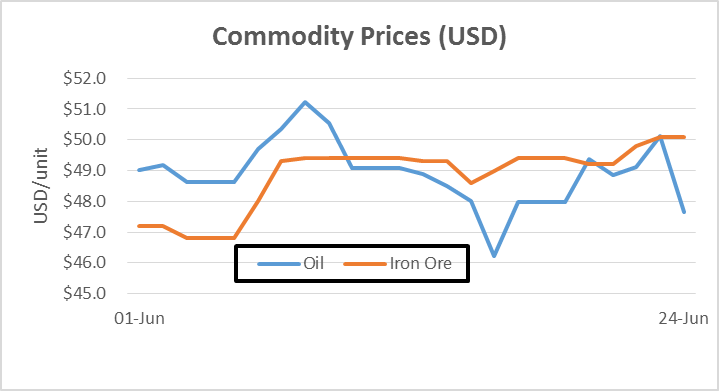 Similarly to equity and currency markets, commodity markets have reacted as expected to a ‘leave’ win with oil falling sharply. Over the longer term, the price of commodities will depend more on supply and demand factors rather than any outcome of the referendum, but markets tend to over react to these one-off shocks in the immediate aftermath.

Gold also tends to outperform in market uncertainty and this has eventuated too, with the price of gold up 5% from the day before the vote.

How was EISS positioned for Brexit and what are we doing now?
EISS was conservatively positioned leading into the Brexit vote, given the potential downside risks of a ‘leave’ win. Accordingly, our investment funds were holding excess levels of cash and selling down some of the equity exposure as markets rallied prior to the vote. This proved to be a wise decision as markets have fallen sharply now the ‘leave’ decision has been confirmed. As markets settle down over the coming months, EISS will closely monitor opportunities as they arise and react in a way that optimises investment returns without taking excessive risks. European and UK equity markets make up a small portion of the EISS investment options, with the Balanced Fund only holding 2% in European and 1% in UK equities.

Only about 2.7% of Australian exports go to the UK, so the Brexit result was not going to have a material impact on Australian businesses no matter what the outcome. Although, it could affect short term confidence in global economies and may add to the case for the Reserve Bank of Australia (RBA) to cut interest rates again some time over the coming year.

As always, we are conscious of protecting capital and this is particularly important in volatile times. Remember that super is a long term investment and equity markets will go up and down over short periods of time. Investors should be patient and willing to ride out the volatile times in order to achieve the long term returns required to meet retirement needs.